The annual cultural phenomenon that is San Diego Comic-Con International celebrated its 50th anniversary last weekend (July 18-21). Over 130,000 self-proclaimed geeks, nerds, and super-fans attended the convention throughout the four-day period, and hundreds of thousands of comic and pop culture fans hit the streets of San Diego to surround themselves with the festivities. Entertainment, film, gaming, and tech entities showed up inside the convention center and within the wider downtown San Diego footprint to engage with genre and comic fans, and drive what they have in their pipelines.

Note that San Diego has already been mentioned three times in this write-up… and now four! That’s not because of poor writing or an obsession for the city; it’s because this metropolitan hub serves as a vital main character for the fan-driven behemoth. Comic-Con and the outside events that surround it benefit from downtown San Diego’s intimate yet eclectic feel, much like SXSW and how it takes over downtown Austin.  The abundance of hotels, cultural attractions, and more, all within a small proximity, allows for a true feeling of a “takeover” where the city transforms into a pulsating heart of entertainment and cos-play. This gives brands the opportunity to make their presence known and interact with a highly receptive and engaged audience in what amounts to a pop culture fishbowl.

One of the brands that turned up in an eye-catching way was Unilever’s Axe as a part of their partnership with Comic-Con favorite, Marvel. The program was done in partnership with a comprehensive Mindshare team, including leading roles by Mindshare’s Invention+ and the Content+ sponsorship teams; it came about to illustrate (via comics and content) Axe’s brand communications around celebrating individuality. The collaboration showcases five new teenage superheroes called “The Fresh-Men” in digital and comic print form, backed up by a curated hip hop soundtrack and various digital and social media extensions. Marvel helped bring the partnership to life inside the convention center by using one of Axe’s brand ambassadors, Kyle aka SuperDuperKyle, who was featured on Marvel’s main stage, speaking passionately about individuality and his personal story. Kyle spoke to the packed audience about his love for comic culture and spreading positivity via his relationship with Axe. As Kyle spoke, a Marvel artist wowed the audience by conducting a live comic drawing of Kyle and the Fresh-Men (which includes teen women as well).

Speaking of being wowed, this year’s Comic-Con announcements (other than Marvel’s Phase 4 takeover and DC’s Batman experience) was dominated by TV and OTT announcements and experiences.  As the imminent streaming war creates chaos and confusion, streaming, premium, and cable networks know they have to attract viewers at any cost. Comic-Con serves as a prominent podium for the likes of Amazon, Hulu, CBS All Access, Fox, Netflix, and the like to launch their original content and to create onsite experiences that drive fans into frenzies, broadcasting to the rest of their communities through social and online portals.

This year, we saw entertainment brands investing millions of dollars in rich, multilayer, tech-rich experiences, OOH takeovers on transportation and buildings, and, in a change this year, some very simple experience-based activations. In previous years, we have seen major activations include AR, VR, MR, and every other bell and whistle imaginable. This year, it was apparent that many brands took a step back to create more human, nostalgic or “low-tech” events. It seems brands are finally understanding that creating giant footprints with hours-long lines work well as commercial billboards, but are often less appealing to fans than smaller, curated personal moments that are tied to an emotional connection. In fact, many attendees voiced appreciation that within the overwhelming spectacle of Comic-Con, a number of their favorite genre shows and films were offering them access to a short, quality experience, and then allowing them to move on to the next thousand displays.

Ultimately, Comic-Con is about fans celebrating and personalizing the best of genre storytelling.  Brands marketing at Comic-Con need to acknowledge that context, and realize that their best role is to enable and elevate experiences for fans, not try and insert themselves as the protagonist. If brands want to become heroes at Comic-Con, then they must embrace the role of trusted sidekick, and generate cultural credibility and consumer gratitude in the process.

The Drum: Huggies pipes spend into addressable TV and microinfluencers in… 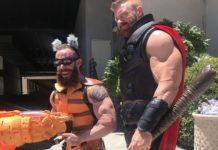